Continued from Part 1 ....
For M who is almost 7-year-old now, I adopt a very different approach at home.
Before, I used to coach M in almost the same way as I am doing with Chip now. The only difference is we didn't read as wide variety of Chinese books in the past. But in the last 6 months, I've increased the intensity and time spent weekly on the language and included lessons that equip him with skills to ace the school assessments.
When M was in K2, his kindergarten didn't teach hanyu pinyin (HYPY), which in my opinion is a good thing. Instead of sending him to HYPY classes which required him to begin in January (last year when he was in K2), I taught him myself in end Oct (just before his term 4/K2 ended) using just one assessment book from EPH. The wait was to ensure that he had recognized enough new words before HYPY was introduced.

We had home-learning sessions twice a week for about 7 weeks (we stopped in mid Dec) and he went from knowing nothing about HYPY to being really good at it by the time he started Primary One this January. There wasn't any confusion between HYPY and phonics at all.
He finds HYPY a breeze in school. The school text/workbooks are real straightforward. Even the mastery tests and additional worksheets from school are fairly simple in my opinion. But we all know that to excel, one can't just be good at them. So of course I prepare him for more.
We use one main assessment book which includes 320 pages of worksheets organized according to the Primary 1A Chinese/Higher Chinese syllabus. 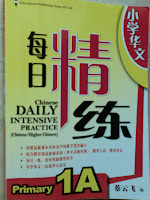 I like it that the same content from a chapter of the textbook is being introduced and tested in as many as 22 different practice formats, which will certainly help to strengthen his foundation. Usually he will do between 15 to 25 pages a week on his own and I only revise them with him afterwards.
I don't find it necessary or that useful to go ahead of school syllabus, so instead of spending our precious time learning the Primary 1B or 2A syllabus, I introduced other materials such as the 四五快读 series.

While I know of this series since M was 3 y.o, I only introduced the Book 3 to him last July when he was in K2. I skipped Book 1 and 2 because they introduce very basic words and phrases, which can be better taught using the other resources that I already own. For the same reason, I also didn't use these first two books with Chip.
Despite the raving reviews on this series, I have reservations on depending solely on it to coach the kids. The book format and passages are really boring and there are often phrases that the kids can't relate to. So instead of following the suggested lesson formats faithfully (and blindly), I only use the books as one of my resources to meet my overall learning objectives.
We also try to read-aloud daily for between 10 to 30 minutes per sitting. That said, so far we have only managed an average of 4 times a week.  The main materials I use for read-aloud are the 好朋友知识报, our growing collection of Chinese storybooks and passages from different sources that I have, including the assessment book.
He has certainly made huge improvement since January in word recognition and fluency. Now he can read a passage of about 200 to 300 words fluently in 3 to 4 minutes, depending on its difficulty and actually understanding it. This is something which I am really pleased with.
One of the areas which he struggled most with a few months ago is in our preparation for 口试 (oral exam/oral skills). Since he doesn't speak Mandarin as frequently as I like him to, this is to be expected. Unless a child is a fluent Mandarin speaker, acing the oral exam will require some practice and honing of skills. I put in a lot of hard work (read: hours of tearing my hair out and making my blood pressure rise) in this area, but it seems to pay off. Now it remains to be seen if he truly does well when tested in school.
Besides his fortnightly 听写 given by his teacher which I get him to learn on his own and only tested him the day before, I don't give him any words/phrases to write or learn and he has no writing homework from school either. The only writing he does is for the practices in the assessment book I just mentioned. Surprisingly, he can now write a lot of new words from memory. So the method I've adopted so far must have worked well enough to 'imprint' the words in memory without him wasting time/effort on 习字 （repetitive writing).
The most encouraging sign is his growing interest in the Chinese language and culture. He is more enthusiastic towards Chinese storybooks now and would even join in voluntarily when I am reading to Chip. Often, he would select a few Chinese books for me to read to him. The most recently is 鸡蛋哥哥. 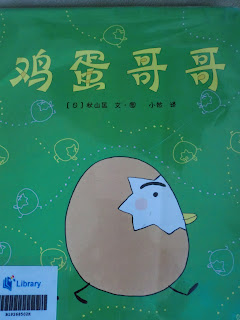 Interestingly, when a friend lent me the set a few months ago, he shunned them. But now, because of the improvement he is making in Chinese, he is beginning to give most Chinese stories more time and more willing to make the effort to listen to and read them.
I think he is finally more convinced that Chinese stories can be just as fascinating as the English ones. In the recent few months, he has amassed sufficient vocabulary and is a lot more confident and keen to just pick up any Chinese book and attempt read-aloud himself.
The fact that he has emerged top 3 in class for the Chinese subject has also greatly boosted his confidence and awaken his competitive streak. The intrinsic reward he gets from that unofficial ranking seems to work sufficiently well to keep him motivated, as he puts in the necessary effort to maintain that position. Now, he will openly declare to me that he is actually quite good in his Chinese too. Haha!
See, the tiger mum in me always believes in this - a child always enjoys what he is good at and will be more willing to put in effort to continue to be good at it. So if we help 'push' a child who is weak in something up to the point when he realizes that he is/can be good at it, his own motivation will take care of the rest.
I'm pretty sure I've managed to push him past the biggest hurdle in this learning journey. The road ahead should be easier now, as long as he maintains a positive learning attitude.
I don't know how much to credit the school for this because from what he has told me so far, the quality of their Chinese lessons is far from meeting my expectations. The lessons are all very simple and straightforward, following the textbook/workbook closely. Though there are supposed to be daily lessons, in reality he seems to get only 3 to 4 proper lessons a week. The remaining periods were used for all sorts of other admin/assembly-related matters. Well, at least he likes his Chinese teachers (yeah, he has 4 Chinese teachers, not just ONE because the main teacher is always away for courses/training/involved in some school events and CCAs! It's so ridiculous!)
Never mind. We are making reasonable progress and we are both happy about it. Good enough for now! The march on continues....

good to hear about the success you had at getting your kids interested in chinese. Its something I had been working on too...

Can you share with me on the assessment book that you are using with your boy?

The one I used was for 1A syllabus only. And I have been told by Popular that the both the 1A and 1B books are out of stock all over Singapore and they don't know if there will be new stock. I would imagine most assessment books are more or less the same.

Hi,
Glad to know that you are also using the 四五快读 series of books. I have had great success with these books.

Thanks to these books, my daughter started to read long Chinese novels of over 70000 words by the end of P1.

My P1 son, who will turn 7 years old in September, is also able to read Chinese chapter books (over 140 pages) without the need of hanyu pinyin.

Note that if used correctly, it is not supposed to be boring to teach using the 四五快读 books. In the first 30 pages of book 1, the author explains how to use games to teach. Parents are not supposed to just read out loud from the books. In fact, my younger boy has a lot of fun learning from these books.

Hi Tamarind, thanks for sharing your experience. I've no doubt these books are useful as teaching resources, but I won't use them as the sole resource. I'm aware of the first 30 pages with suggestions of games and how to use the books, but I prefer to use only selected suggestions only. Even with games, the passages in the books are not always interesting reads.I'm sure some preschoolers/lower primary kids will fancy them, but some passages are just too childish to interest my 6+. Personally, I also prefer better written passages than the ones found in this series.

May I please know how one goes about teaching oral language skills? Thanks!