First Book by 4yo M

Yes, this is the first book written and illustrated by M!
Ever since he invented the idea of a triple decker bus, he would talk about it from the moment he wakes till he is tucked into bed. Frankly, he has so many ideas about what that special bus is and can do, that sometimes I am both amazed and amused by his imagination. After listening to 'err.. Mama, a triple decker bus can/is... ' 30 times daily for over 2 months, I suggested that he writes a book about triple decker buses, so he can document his ideas and also include his drawings. Of course that excited him a lot and we promptly started working on it.
How it works:
I let him decide what to write and draw on each page. He told me the sentence and I wrote it on a paper for him to copy onto the page after he has completed the illustration. All sentences are composed by him and all writings, drawings and coloring in the book are entirely his own.
Book cover
Triple Decker Bus Book by M Quek, October 2008 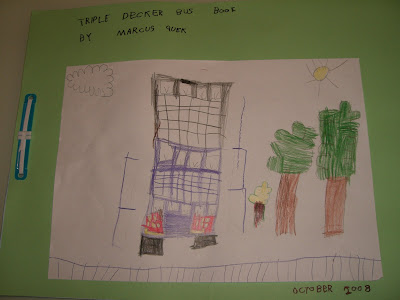 Page 1
Brmm brmmm! What is rushing by very very fast? It is a triple decker bus. 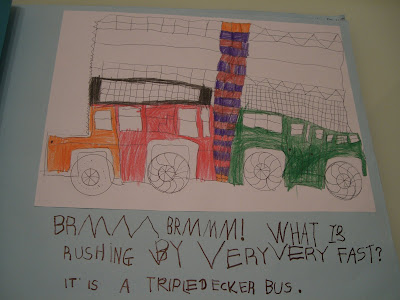 Page 2
A triple decker bus is the biggest vehicle in the world. 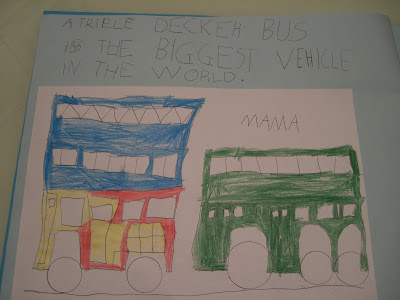 Page 3
A triple decker bus can travel over roads and rough land. 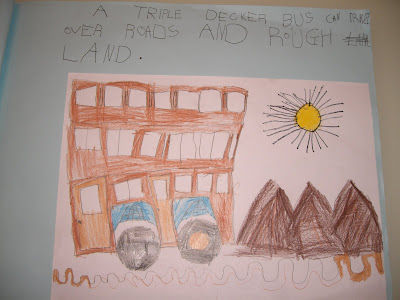 Page 4
Some triple decker buses are very long. This one has 22 wheels. 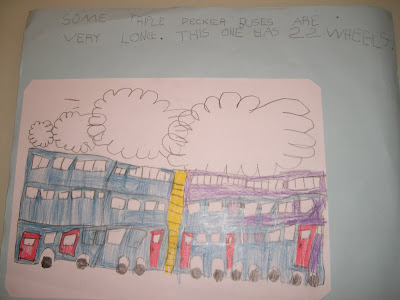 Page 5
A triple decker bus can be as tall as a building. 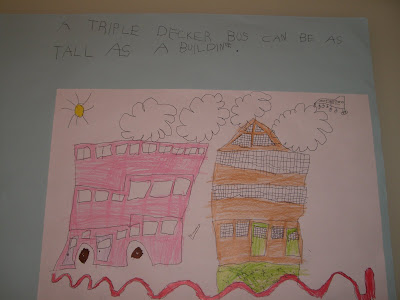 Page 6
A triple decker bus can carry lots of passengers. See the smoke coming out of the chimneys on the roof of the house. 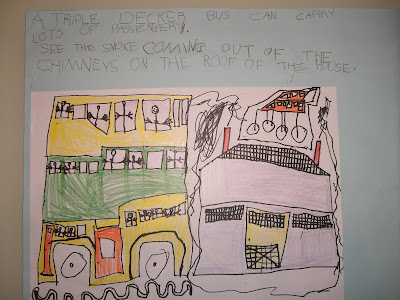 Page 7
The two triple decker buses are going in opposite directions. 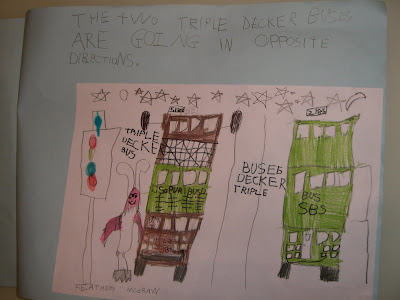 He has lots of fabulous ideas about the triple deckers that he wants to include in the book but we just can't, unless he write essays. So for now, we will settle for just these pages. After all, it is his first book and I am sure there will be more to come.
Already he has lots of ideas for his book #2 and #3 etc.. and even wanted to write a chinese book about triple decker buses!!
I can't be more pleased and proud that he is so enthusiastic about this whole little project and would want to work on it the moment he gets back from school. Because of the perfectionistic streak in him, he tends to discard many drawings if he thinks that they aren't good enough for the book, so some days, we work on about a page or two only.
Edited to add: It is hard to say how long he took to write and illustrate this book, since he took a long break after completing the first 6 pages and decided to draw only trucks and other vehicles. He finally did the Page 7 and the book cover which I just added.

Good job Marcus! I realise he has more colors in his work now. Is it because of the art class? Love to see his work and ask him to read to my kids :)

It is possible that attending the art class has fueled his interest in splashing his drawings with colours. As before he was always more keen to draw than colour, so lots of black n white pictures. Now almost every piece is coloured, But maybe also because I always tell him that I like very colourful pictures, so I encourage him to try different colours in his daily artwork.

I think it will be great if the kids can sit together and read through a book. Lets do that next playdate. He does read to Nicholas a few times a week. :)

I love his story. It's simple and yet not. It's something I would expect to read in a children's book. Well done Marcus!

Wow, this book is priceless. Impressive too! :)

Looking forward to his sequel of the triple decker bus. Keep me posted.

Thank you everyone! I relayed all the comments and compliments to Marcus yesterday and he was visibly pleased and a little shy about his accomplishment.

It is indeed a priceless piece of work. :)

I love the Feathers McGraw!