I saved a few pizza boxes a while back and we transformed one of them into an aquarium around Mother's Day. This was probably the most time-consuming craft we have ever made and I had to do all the assembling since it was too complicated for the boys.
I let the kids suggest the underwater creatures and I cut them from cardboard. The boys painted both the exterior and interior of the box and the sea creatures. 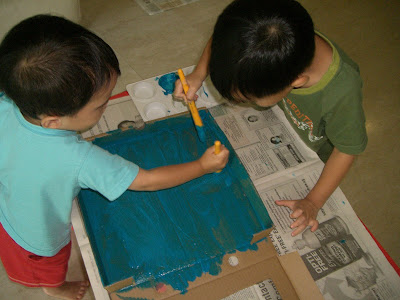 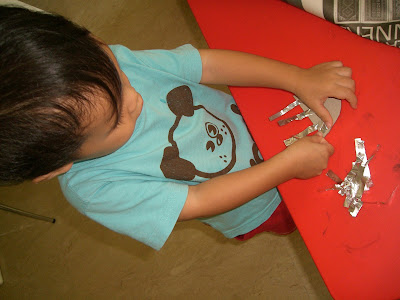 Chipsy sticking the tentacles for the jellyfish before decorating it with glitter glue.  They each painted a fish and M insisted on adding a pretty borders for the fish. I didn't expect his hands to be so steady and he did a really good job there. 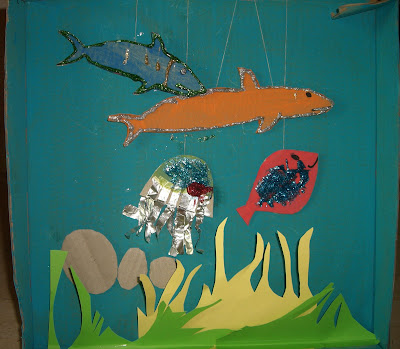 While they were decorating with glitter glue, I cut the coral and plants. Then I assembled them everything with threads, tape and clingwrap as the 'glass'.
The final look - the dangling creatures look like they are 'swimming' in the water. 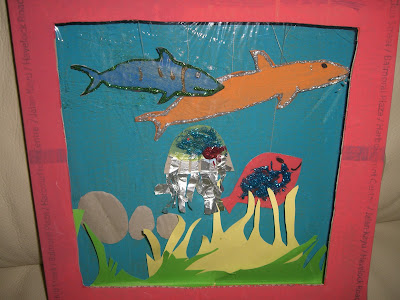 Hey, this is a really neat piece of craftwork. Kudos to the joint efforts!

Thanks! The kids enjoyed it so much and was so thrilled to show it off to daddy. That makes it all worthwhile. :)