Artwork: When The Kids Were Four

Recently, I looked through Dolly's pile of drawings in the last 12 months as I attempt to record her progress in this blog. I used to be more diligent in keeping track of the boys' development in this aspect, so I was curious to compare the differences in the three kids' interests.

When M was 4 years old
He was fascinated with vehicles. He loved to look at pictures of different vehicles and we often visited libraries where he would sit quietly to browse the hundreds of pictures. Not content with the usual vehicles, he created monster trucks and triple decker buses. 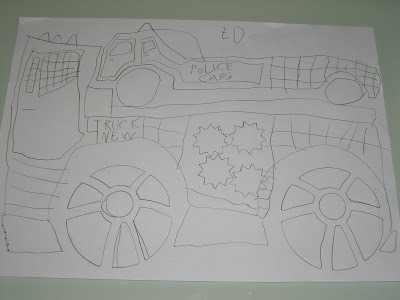 After his years of obsession with vehicles, he began to explore drawing dinosaurs, starting with T-rex.
I was really happy then to see him venturing out of his comfort zone and was more willing to attempt new subject matters, though he also did not give up entirely on vehicles (not that I wanted him to). He decided one day to draw vehicles with broken lines, inspired by something he saw in a book and he continued to create bigger monster trucks. 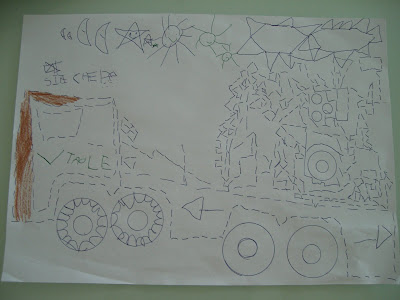 By the time he was nearly 5, he had created a character of his own - the Gunsaurus, complete with perspectives, storyline and tons of illustrations. 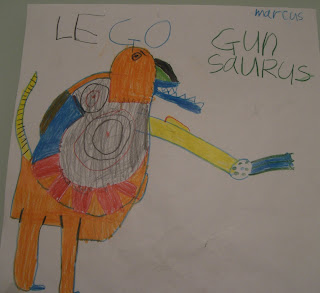 Perhaps it was a combination of his fascination with dinosaurs and machines, boosted by his keen observation and ability to focus for a great length of time, he went on to create incredibly mechanical drawings after he turned 5.

When Chip was 4 years old
He was inspired to draw simply by spending all his waking hours with his older brother. But his style was very different. At the tender age of 3, it was already very obvious that he preferred less mechanical subjects.

He started out with more faces, people and animals, which I think stemmed from the fact that he has always been more sociable than M. As a natural story-teller, his drawings were usually illustrations that accompanied his stories, rather than just a lone picture.

Then came a time when he loved maps and mazes. 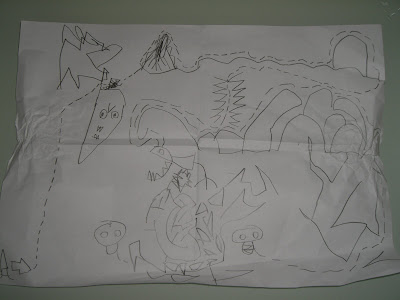 A map with a big story.

Chip started out playing hand-held games at a younger age than M, which I think explained his sources of influence and how they affected his drawing style too.

From Gesundheit to Angry Birds and PVZ (aka Plants vs Zombies), the characters of these games often appeared in his drawings. 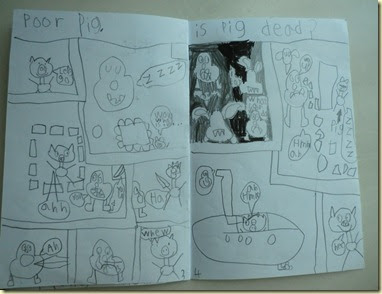 Of course, how can we forget the time when we even received an email reply from the creator of Gesundheit who commented on Chip's drawings of his famous game!!

And the funny random pieces that he used to create daily, such as the misspelt Space Shit!


When O was 4 years old
Unlike the boys, she has always been obsessed with colouring and takes pride in colouring within the lines since she was just a wee 2-year-old. I have never encouraged colouring as an activity, which I think is a waste of time, but since she loves it, we just let her be. It beats watching TV, I guess. Since I did not buy colouring books, she started drawing her own shapes to colour. 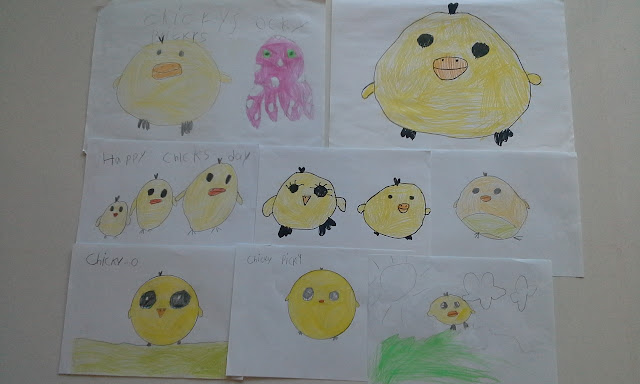 She drew these all by herself. Just by looking at her 'model'. There was a period of time when she would 'churn' out a few Chicky drawings a day. Just imagine it went on for weeks!

As for these ocean creatures, some were drawn in the same ways, with the stuffed toys in front of her. For the others, she might have looked a picture or image we found online or on the DVD box. 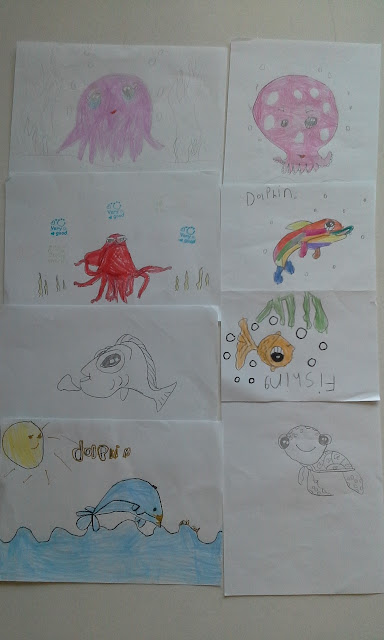 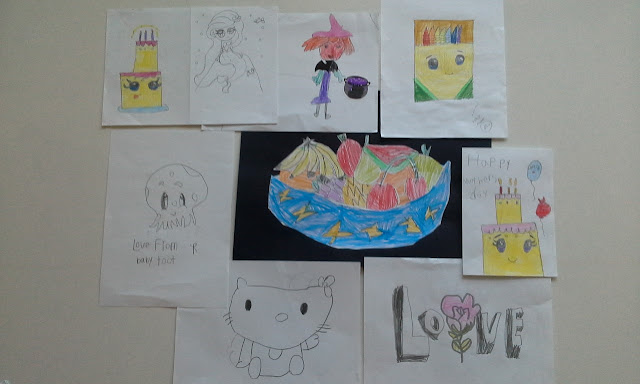 The same goes for these few. We probably have over 50 drawings of crayon boxes and birthday cakes!! We did not encourage her to repeatedly draw the cakes or chicks or crayon boxes. She just wanted to do it, over and over again. But that was how she perfected her 'craft'!

In that period, she spent over 4 hours a day drawing and erasing, more drawing and colouring until she was satisfied. In the earlier days, she got frustrated and discouraged a lot. But due to all the lapbooking and play-based activities we did at home when she was younger, her concentration span was so good that she could easily spend two hours drawing without breaks. With some encouragement and coaching in the right direction, she bounced back from her 'setbacks' quickly and would resume perfecting her skill.

Once she got to a certain stage, she needed no more coaxing or urging from anyone. The moment she woke up, she would head straight to her desk and began her 'important work' as she liked to call it.

It was the same with my boys. Exactly the same.