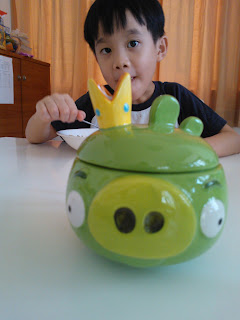 
My middle child who has turned 9 recently, has grown and changed quite a fair bit.

Perhaps the only thing about him that has remained consistent through the years is his love for pigs and all things related to pigs.

No, he does not like pork. He just loves pigs. He refuses to eat pork unless we can convince him that they were of mean pigs.

The big brother would sometimes be real mean and deliberately suggest otherwise, which often resulted in bickering and some tears. Though I must admit I find it hard to fathom why with a bright mind like his, he would believe our version either. Perhaps it is a case of selective perception.

My middle child has a different personality from his older sibling. He is more adventurous and has no qualms exploring and giving new experiences a go, especially if he knows we approve.

He is still very inquisitive and often asks fascinating questions, which demonstrates his ability to consider the subject from all angles.

His love for games continues and he is always game to learn a new one. Since the Plants vs Zombie phase, he has been deriving great pleasure from a few other games, notably the Dragon City and Clash of Clans. When he plays, he seems to be in an entirely different world, so while I know he has great fun and seems to have a knack at strategizing (so hopefully there is one useful skill that he is honing) I have to enforce curbs to prevent him from turning into one of those gaming addicts.

He still enjoys drawing and would draw almost daily. He has even asked for drawing lessons, but we have been slow at acceding to his request.